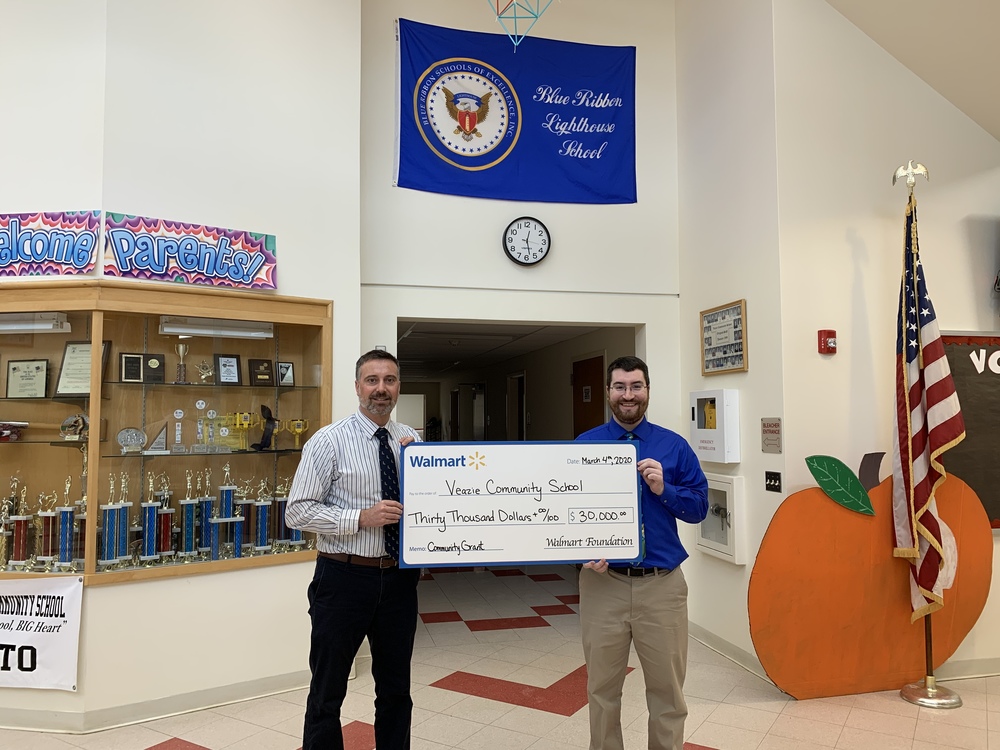 Veazie Community School, a public PreK-8 school that currently serves 146 students has received an incredible gift from a major retailer. Music teacher Mike Arell received an e-mail in February from Rachel Stelline, Manager of the Bangor Walmart Supercenter. It stated that the Veazie Community School music program would be receiving a $30,000 grant from Walmart Corporation. When he saw the amount, Arell thought that the message was too good to be true. To his great surprise, the information, including the amount, was all accurate.

At the beginning of the 2019-2020 school year, Superintendent Matthew Cyr had Arell had discussed ways to expand Veazie’s music program. This meant a particular focus on having enough high quality instruments and equipment so that interested students could participate fully in music ensembles, whether they owned an instrument or not . Cyr and Arell began to reach out to community members, businesses, and media outlets. Their hope was that local amateur musicians would remember how important music has been in their lives and pay it forward by giving the gift of an instrument to a student in need.

The school’s message moved beyond the greater Bangor area and then went national. By the beginning of December, Veazie Community School had received 35 donated instruments and other musical equipment. Caring people from Maine, as well as Massachusetts, New Jersey, Pennsylvania, Washington DC, Illinois, Michigan, Utah, and Colorado, sent donations to the school. Many others that did not have instruments, but wanted to contribute, mailed in monetary donations that totaled about $2,000. Students and staff were overwhelmed to learn that people hundreds or thousands of miles away that had never even heard of Veazie Community School were willing to give because they cared about children and knew the importance of learning music.

Concurrently, Arell had applied for various music program grants. In October, after an application process and interview, Veazie Community School was awarded $1,000 as a community grant from Bangor Walmart Supercenter. This was a larger grant than Arell had anticipated and the students were very excited and thankful.

What Arell did not know was that after the local Walmart grant had been awarded, Walmart Corporation noticed the media coverage that Veazie’s instrument drive was receiving, and authorized an additional grant of $30,000. This substantial grant is the first time that Bangor Walmart Supercenter has presented such a major award. Veazie Community School is the only school in the state to receive this large an amount from any Walmart store this year.

2019-2020 has been an exciting year for Veazie Community School. In December, the school was recognized as a Blue Ribbon Lighthouse School. For the music program in particular, interest in ensembles has grown. About 70% of all 3rd-8th grade students choose to participate in Band class and about 50% of all 6th-8th grade students participate in Chorus class. The students’ enthusiasm for creating music and for learning is contagious.

The large grant from Walmart will allow the Veazie music program to continue to bring high quality musical experiences to all students and to help foster lifelong appreciation for music learning. This significant award will contribute to the goal of Veazie’s students, staff, and administration—to create a school culture of musical achievement. Veazie Community School is a small school with a big heart and the school’s heartbeat comes from its passionate music students that now have even more opportunities.